Founding RBHS member and award winning author Scott Pitoniak served as the evening’s emcee. Scott kicked off the evening by welcoming guests and then he was followed by RBHS president, Joe Territo who delivered his opening remarks. The event was co-sponsored by the Luke Easter Chapter of the Society for American Baseball Research as they were also celebrating SABR Day, a day in which such events take place all over the country. Chapter President, Ryan Brecker, took to the podium to welcome the SABR members in attendance.

For the second year in a row, Club 3000 at Frontier Field offered the perfect venue to celebrate Rochester’s baseball history on a chilly January evening. The view of the field offered guests a much needed vision of hope for the upcoming baseball season. 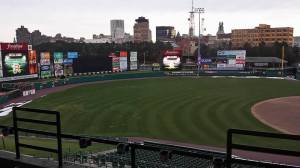 Following John Thorn’s speech, Scott Pitoniak moderated a question and answer segment with the guest of honor. Guests had filled out question cards during dinner and John graciously answered them, often with great humor.  The evening concluded with the organization presenting Mr. Thorn with a framed honorary lifetime membership card.

The 2016 Hot Stove Dinner sold out fast so it is recommended that you RSVP quickly to next year’s event when it’s announced.